Wildflower: "The Woodstock of Triathlons". I can now say this seems like a very accurate description. This past weekend was the twenty-something-th running of the Wildflower Triathlon event at Lake San Antonio on the Central Coast. 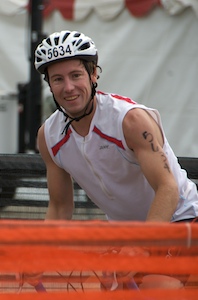 I had first heard of Wildflower a few years back when my sister told me about an event she was going to where there was a giant party and, almost as an afterthought, a triathlon was held. As my interest in tri's increased, I of course heard more about Wildflower. I came to find out that there are 3 events: the long course (a half Ironman), an Olympic distance course and a mountain bike sprint.

Then, sometime in the last couple months, I decided to start my 2009 Olympic distance tri season with Wildflower. The first thing I did after signing up was to begin to round up a posse to join me at the event. I managed to convince my friends Dean, Joe and Rachel to come. My sister and her friend also decided to volunteer, so I'd be seeing them on the course somewhere. The plan was coming along beautifully. Until I realized the Olympic event was on Sunday, and the other two were on Saturday. This was a major bummer as I was hoping to totally enjoy the festival and relax and camp after my race. Instead, I had to go through another full day of anxiety as I watched the other races. I just hoped to find a camping spot that wasn't going to be too loud Saturday night.

So in the months leading up to the event my training consisted mostly of frequent CrossFitting, biking on some weekends, and when the event got closer, swimming a couple times a week. I really should have done more cycling and running, but a combination of laziness and busyness led to more nights not running, and more excuses to no cycle places. Plus it was cold out lots of times! I did feel a bit underprepared for the event, and plan to change that feeling in the future, but I knew I could finish. Based on my previous Olympic distance tri, I set a goal of 3 hours and 30 minutes. Yes, this is 40 minutes slower, but I liked that it was a round number. I decided to shoot for around a 30 minute swim, 2 hour bike and an hour run. I knew the bike and run had more hills than other tris, and I suck at biking, so I added more time to them than my previous tri.

Originally, our posse was set to leave Friday night from the Bay Area, and drive down to Lake San Antonio where we would get to hang out all day Saturday before my race Sunday. But then a storm came in and dumped rain on us and we got scared. So we postponed our departure until Saturday morning, attempting to get down and witness part of the end of the long course bike and run. The drive down was (mostly) uneventful and got to drive next to athletes tackling Nasty Grade and Heart Rate Hill. I was not jealous of them. We finally arrived at the entrance to the lake, but had to wait for most of the bikers to make it back before we could drive down. So we hung out, ate lunch and eventually took a drive down the Olympic distance bike course before we were able to enter and setup camp. Saturday evening I setup my gear and prepared my transition bag before taking an Ambien to get the best sleep I could.

I woke up at 6:30am to prepare for the event. We had a nice breakfast before I began to change into my tri shorts. As I was getting them out of my bag, I noticed what seemed to be a hole in the butt. Upon closer examination, it was indeed a hole, a big hole at that. I have no idea when or how it got there, but I'm just hoping that I hadn't been mooning the people of the Stanfurd pool for too long. The only option was to get a new pair, and quick. I found a good pair at the festival, changed, and proceeded to set up transition. Crisis averted.

In preparation for the race, Saturday was spent hydrating as much as possible. I know I succeeded because I woke up 3 times to pee Saturday night. For the race, I had 2 Gu packs on my bike, and one on my shorts for the run. I planned to have one at the top of Lynch Hill (the first bike hill out of transition), and then one after the 12 mile turn around. And then I had plenty of Gatorade. The race started at 9:20am and I finished a few hours later:

So as you can see, I did better than my goal. My swim was almost dead on with my last race, and my run was only slightly slower, despite the fact that Wildflower has about a 1200 ft elevation gain in the run alone, and the SF tri was completely flat. As usual for me, the bike killed me. My super slow pace seriously hurt me. The top guys had paces of 23 MPH, with one guy at 27 MPH! I did pass 5 people on the bike. And only 2 of them had flat tires. There was no point in trying to count the number of guys who passed me. Though I'm sure I passed quite a few of them on the run. Obviously, I need to work on this area. I really think I just don't know how to cycle, plus I'm just not used to it. So if you know how to cycle and want to give me tips, and/or have an indoor trainer for me to use, please let me know! 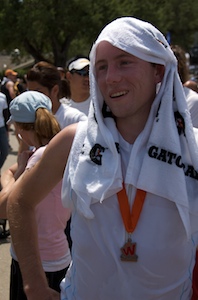 I felt really good at the finish, save for some initial feelings of wanting to puke. But that was cause I was sprinting the last couple hundred meters. I even had some gelato shortly after the race (thanks Dean, Joe and Rachel!). Also, I really do want to thank those guys for coming. I really, really liked having them at the various transition areas during the race. I also want to thank my sister Amy and her friend Margo for bailing on their volunteer duties to cheer and study. Having someone you know at the race cheering you on really boosts your spirit and gives you that much more energy and motivation to do your best and fight on, which is really important in endurance events. And having an entire posse, that is truly awesome :).

So what did I gain from this? I had an amazing weekend and really enjoyed the race. I've also decided that 2010 is the year of the half Ironman for me. Right now, I'm planning on doing the Wildflower long course. I'm going to do several more Olympic distance tris, and really work on that cycling (!) in preparation. Also, Joe and Rachel have been inspired to do the Wildflower Olympic distance course next year. I look forward to being at many of their races cheering them on!

As I write this today, the day after the race, I do so without being sore. I can feel that my muscles did something, but I have no trouble moving and would have hit up CrossFit today except for one thing: I am terribly sunburned. I put on sunscreen, but that much exercise and swimming just stripped it from my body. I can attribute this lack of soreness to two things: CrossFit is awesome, and that I should have given more yesterday during the race. It seems weird to have done 3 hours 15 minutes of exercise and feel the way I do today. Granted, I was a bit stiff for a bit yesterday, even after post event stretching, but not today.

A great race, with some great weather. Wildflower, til next year.