A few months back, around the beginning of September, my sister, a friend and I all decided that we wanted to do a longer trail run. We actually decided this while on a run through some redwoods together. Since we enjoyed trail runs, we decided that the best way to do a longer distance run would be to sign up together and commit to finishing instead of focusing on being competitive in the race.

When we got home, we looked up to find a 30-35 kilometer Pacific Coast Trail Run that was several months out, giving us plenty of time to train. We settled on the Rodeo Beach 30k, on December 18th. It was on the shorter side (30km instead of 35km), it was plenty far out, giving us a lot more time to train, and it was in the Marin Headlands, a beautiful area that we could train at. I signed up almost immediately, as I knew the act of signing up would get me to commit mentally. My sister signed up and so did my friend (at least I thought she did). I also got a couple people at my gym to sign up too. Things were shaping up nicely. 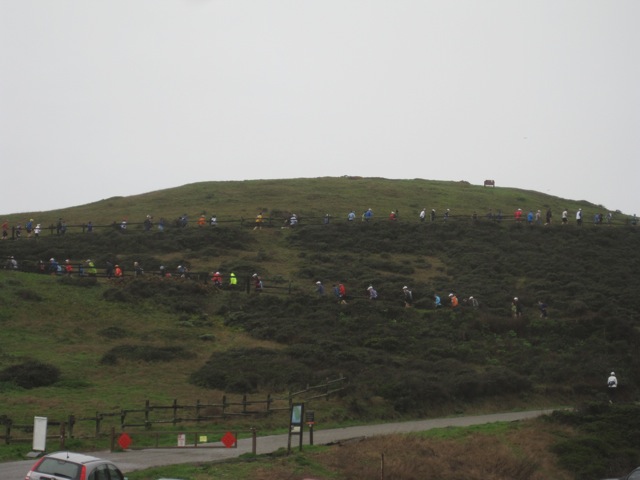 I didn't train as much as I wanted to while on my Balinese vacation, and upon returning, I tried to stick to a more rigid training schedule where I ran more frequently. Well, I didn't stick to that schedule as well as I should have. As of the day of the race, the farthest distance I had run in the many months prior was about 7.5 miles, not even half of the final distance of 18.64. I wasn't terribly nervous, I knew I could still finish the race, but I figured I'd be doing a lot more walking that I'm used to, especially up the hills. And there are a lot of hills on this race, giving the 30km race a formidable 3740 feet of elevation gain along the course. However, it turns out my sister and friend also hadn't been training for the race either.

Then, because of an Omega block sitting in the middle of the Pacific, lots of rain was scheduled to be directed at Northern California. This threat of rainy weather was enough to scare off my sister. Then I found out my friend hadn't signed up for the race. So much for the idea of a trio of us doing our first 30k together, enjoying the outdoors on single-track. Thus, I was left to do the 30k alone and slightly unprepared.

The weather ended up lucking out and a break in the rain occurred for most of Saturday. The clouds and fog remained, but almost no wind. An 8:30am start at Fort Cronkhite had me excited and ready to get moving. The course went 6.6km to Tennessee Valley, through WWII bunkers in the headlands. At that point, the 30k and 50k runners went on a 10.4km loop up the Miwok trail to Coyote Ridge to the Coastal Trail and back to the Tennessee Valley aid station. before we continued on the final 13.2km return segment and the formidable Marioncello hill (the last, and biggest hill in the profile below), arguably the worst of the 3 main hills.

At this point, my splits looked like this: 0:46 for the first 6.6km, 2:00 total to get back to Tennessee Valley; a little over half way through the course. Another hour and I made it to the final aid station at Conzelman with 5.9km downhill to get to the finish. By now, my hips were sore, my calves were sore and I was starting to feel more negative. However, the negativity disappeared at the aid station where I was able to inject some more sugar into my system; though the soreness remained all the way to the finish. 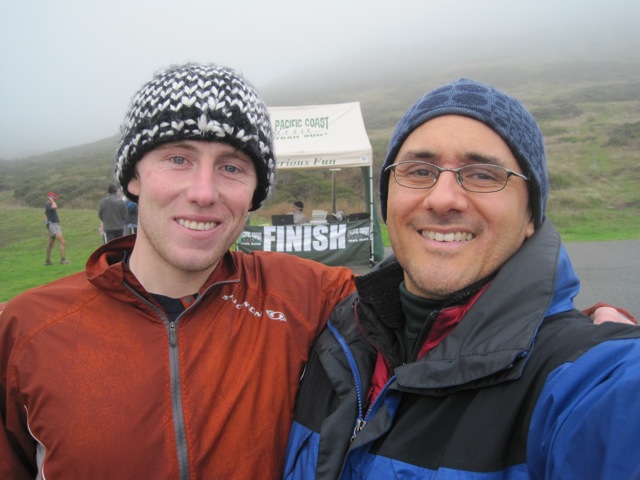 After running along the valley floor for what seemed like an eternity, I finally reached the finish line feeling decently strong with plenty of non-running energy. I definitely didn't have any more kilometers in me, but I also had plenty of strength in my legs to stand. My final time: 3 hours, 41 minutes and 3rd in my age group. Really, the race didn't feel that long and looking back I wonder where the time did go. I really think I was able to take in the course, get into the moment and forget that I was going for such a long distance. My body was pretty sore the day after, but not more so than past long distance runs or triathlons. Before the 30km run, my previous longest run was somewhere around 22km, just over a half marathon distance. This isn't my last 30k, and isn't the longest race I will be running. Maybe next time I'll get some friends to join me for the entire race though.